I wanted to revisit the conversation we had last week in class about the smoke on page 3 of In the Shadow of No Towers, because I think it lends itself to a larger discussion on the advantages of “comix” as a medium and the possibilities for translation into another. The layout of the page, bookended by two producers of smoke (the falling Tower on the left and Art’s cigarette on the right), would be very difficult to recreate in another form.

The way the smoke obscures bits of text near the bottom and clears near the top of the page would definitely not play in printed prose, given the lack of images, and it really would not play so well in film, due to the leveled layout of the page. As mentioned in class, the layout is almost architectural, and each of the stories occupies a different storey. The comic page allows the audience to take in the whole scene at once, top to bottom, while also picking out the individual components at will.

The only medium I could see capturing the movement from top to bottom, left to right, so well as the comic page does would be that of the video game. Braid is a good example of a game that used text and obstruction to good effect, and the interactivity of the player with the text itself was interesting. If this particular page had been a stage in a video game, I could imagine a little 8-bit Art Spiegelman moving up, down, left, and right across an interactive version of the page, with the falling tower and the towering cigarette sectioning off the playable area, the various scenes playing out at different levels.

Still, a video game, and any kind of interactive, audio-visual medium, would have its limitations. The immovability of the smoke and of the other various objects obstructing the text is partly what makes the page so effective. 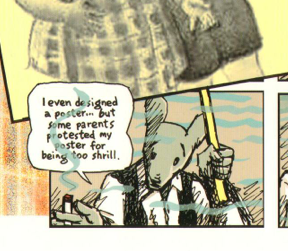 The freeze-framed moments of Art and Francoise on their way to Nadja’s school capture very static, isolated moments of panic, at times truly terrifying, at others absurdly comical.

Comic Art’s anxiety is interrogated from such a wide variety of angles, all of which are present on the page, but none of which ever have to mingle with each other unless precisely dictated by Art the artist. The precision of the layout, carefully crafted by Art, paints a very particular, very Art-specific portrait of the experience of 9/11 that might not come across as so deeply personal if the audience were presented the opportunity to interact with the text.